The Taste of Nation !

Pasta  is a staple food of traditional Italian cuisine, with the first reference dating to 1154 in Sicily.

Also commonly used to refer to the variety of pasta dishes, pasta is typically a noodle made from an unleavened dough of a durum wheat flour mixed with water or eggs and formed into sheets or various shapes, then cooked by boiling or baking. Pastas may be divided into two broad categories, dried (pasta secca) and fresh (pasta fresca).

Both dried and fresh pasta come in a number of shapes and varieties, with 310 specific forms known variably by over 1300 names having been documented. In Italy the names of specific pasta shapes or types often vary with locale. For example, the form cavatelli is known by 28 different names depending on region and town. Common forms of pasta include long shapes, short shapes, tubes, flat shapes and sheets, miniature soup shapes, filled or stuffed and specialty or decorative shapes. As a category in Italian cuisine, both fresh and dried pastas are classically used in one of three kinds of prepared dishes. As pasta asciutta (or pastasciutta) cooked pasta is plated and served with a complementary sauce or condiment. A second classification of pasta dishes is pasta in brodo in which the pasta is part of a soup-type dish. A third category is pasta al forno in which the pasta incorporated into a dish that is subsequently baked.

Pasta is generally a simple dish, but comes in many varieties due to its versatility. Some pasta dishes are served as a first course in Italy because the portion sizes are small and simple. Pasta is also prepared in light lunches, such as salads or large portion sizes for dinner. It can be prepared by hand or food processor and served hot or cold. Pasta sauces vary in taste, color and texture. When choosing which type of pasta and sauce to serve together, there is a general rule regarding compatibility. Simple sauces like pesto are ideal for long and thin strands of pasta while tomato sauce combines well with thicker pastas. Thicker and chunkier sauces have the better ability to cling onto the holes and cuts of short, tubular, twisted pastas. The extra sauce left on the plate after all of the pasta is eaten is often mopped up with a piece of bread. Pasta is largely carbohydrates (mainly as starch), with moderate amounts of protein and manganese. 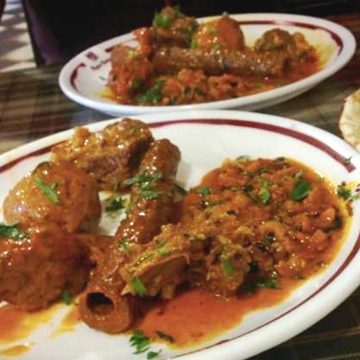